30A Songwriters Festival 2018 Kept the Rhythm 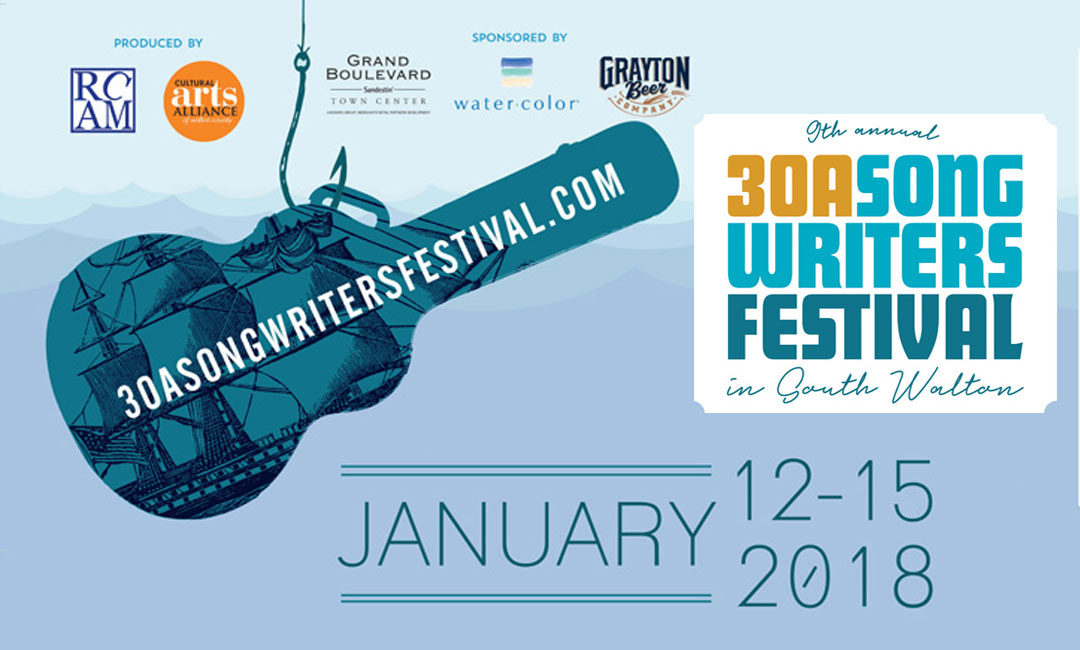 January 12-15 of 2018, AKA the weekend of the ninth annual 30A Songwriters Festival, was undeniably chillier than usual. Actually, with the coast’s humidity and temperatures about 20 degrees below average, it was the kind of cold that seeps into your bones. Despite that and spare a few last-minute lineup changes due to various circumstances (including James McMurtry’s multiple flight delays), the festival was a success with soulful songwriters’ candid, humorous, and deeply emotive songs and lyrics moving devoted attendees.

How 30A Songwriters Festival is Keeping It Real

One of my favorite things about 30A Songwriters Festival is that it’s never lost its integrity, that is to say of the two-hundred-plus artists who convene on multiple stages (mostly small and intimate ones along Highway 30A), it’s all about the songwriters…the people who make the music. The folks who attend aren’t raucous parties who attend to see the hottest pop icon; they’re a mixed bag of old souls, of artists, of storytellers, and more…they’re the kind of people you want to grab a beer and kick back with, which, actually, you do.

In fact, grabbing a beer was the original impetus for the 30A Songwriters Festival, which is why it’s held in January (which is usually a great time of year because our mild climate almost never gets cold…almost). Typically, January’s a quiet time around 30A, so 30A Songwriters Festival was created to stir up a little activity and to bring in some revenue. It’s ballooned into a must-attend event for thousands whose attendance not only supports incredibly talented singer / songwriters but whose attendance also raises funds for the Cultural Arts Alliance of Walton County. The hundreds of thousands of dollars raised each year go to support the arts in Walton County.

Who Stole the Show?

Though the big-names who hit the main stage at Grand Boulevard—people like LeeAnn Womak, EmmyLou Harris, Steve Earle, The Zombies, and North Mississippi Allstars are definitely artists worth seeing given their legacies and contributions to various musical genres represented at the festival, like country, Americana, folk, alternative, and blues, to name a few, I find the real show-stoppers are the smaller, more intimate performances that you stumble upon. You know, you’re walking along in Seaside or WaterColor, and you come across a tent or a place hosting a performance, and the audience is small…there’s no line, so you walk right up and catch a performer like John Fullbright or Ruthie Foster who just steals your heart.

The other thing that makes this festival truly special is that everyone—spare the headliners—usually does at least two performances. There’s always some kind of mashup or instant-collaboration that’s pretty magical. The banter between performers and the audience as well as the Q&A is also fascinating. You leave feeling like you’ve really gotten to know someone on a personal level.

What Kind of Songs Do They Sing?

The other thing that fosters that warm and fuzzy feeling of intimacy (and this year, with the cold, we needed it) is the music itself. Sure, some artists play a smattering of covers here and there, but for the most part, they play their music, things they wrote. For example, Chris Stills’ “Daddy’s Little Girl” was a touching tune inspired by his own daughters (something that hits close to home since I also have daughters) or Kimbrough Richey whose “I Can Hear Your Voice in Everything” was about losing his father to dementia. Of course, not all songs were tear-jerkers (phew). There was a balance of humorous songs as well as humorous commentary.

All of the songs have a timeless quality; they’re usually about something, about human themes that transcend time and that rarely need explanation. Some of the songs actually are timeless, having been around for several decades but that you want to hear over and over because their stories are lived over and over.

Speaking of doing things over and over, I’m already looking forward to doing it again next year. It will be the 10th Annual 30A Songwriters Festival and I expect something truly special (more so than it already is). In case you missed this year and don’t want to be left out next year, hum along by following 30A Songwriters Festival’s Facebook page. The best ticket packages sell out first and fastest. You’ll also want to find a place to stay while you’re visiting 30A, and if you happen to decide to make that a more permanent relocation, I’m only a phone call away.

Laid back locals and a thriving arts culture are just a couple of reasons realtor Cameron Strayhan loves calling 30A her home—and why she wants to help you make it your home. Unlock the key to your future with the help of real estate expert Cameron Strayhan.